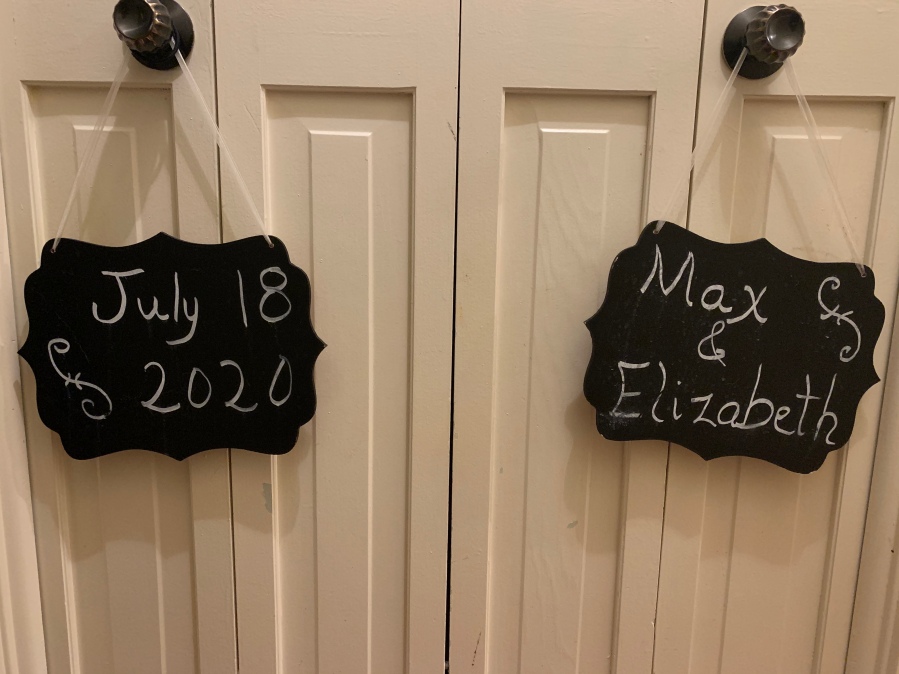 Today marks the six month anniversary of our marriage.

They say the first year of marriage is the hardest and having made it through half of the first year, I think I’m ready to talk a little bit about it.

I heard so many people say that we were going to have a hard time in the first year. So many people said I didn’t know what I was getting into, getting married so quickly. I was frequently told I didn’t have a real relationship with my then-fiancé if we hadn’t had a screaming fight. We were told we were too young, too hasty, even foolish.

The insinuation behind all of them was that getting to know your new spouse and learning to live with them is going to be incredibly difficult, even unpleasant. I wonder where such an idea comes from?

I think there is a critical misunderstanding of what it means to have a healthy relationship in modern society. The high divorce rate argues this for me, I’d say. I also think that many people assume that their relationship is the norm, especially if it hits one extreme of the other (either very good or very bad).

Strangely enough, I even had someone tell me that my relationship wasn’t healthy if we hadn’t had a fight where we screamed at each other. I’ll use this particular piece of advice as an example. While I think the advice was well-intentioned, I certainly don’t think it applies to everyone. Neither my husband or myself can stomach arguments where voices are raised. Even outside of our relationship with each other, we try to stay calm during disagreements and generally are committed not to scream at anyone. So, it wouldn’t make sense that a signal of a healthy relationship between us would be a fight where we screamed at each other, since that would be completely out of character for either of us.

Furthermore, even though we got married very quickly after first meeting, I don’t have even the slightest doubt that we made the right choice. We first spoke online in April of 2019 and were married July of 2020, having only met in person for the first time almost exactly one year before. But in that amount of time, since we knew we were looking specifically for a spouse, we talked about as many important things as we could. Everything that was crucial to us was discussed at length. Trust me, if you’d have seen the texts we sent each other and listened for the hours upon hours that we FaceTimed (online, long-distance relationship), you’d understand I’m not exaggerating when I say we practically talked everything to death. By the time we were engaged and were being advised by a mentor couple through our church, we’d talked about literally everything they were required to cover with us in the book without even knowing we’d done so. What I’m saying is this: it may be a bad decision for some people to get married so quickly, but it definitely isn’t a universal rule that getting married quickly is bad. We were about as ready as its possible to be for such a big life decision.

I had been told by so many people that I was too young to know what I want, that I was too young to know my spouse well enough, that I was too young for the responsibilities I was about to take on (especially considering we want children as soon as possible). Also, I feel like where I was told I was “too young” you could also write in “too inexperienced”, “too naive”, et cetera. Keep in mind, I was already an adult, had already finished my Bachelor’s degree with honors, was about to graduate with a Master’s Degree as well, had lived on my own, and had multiple jobs, sometimes working two at once. I was definitely old enough and experienced enough to accomplish all that in my life, why was I somehow too young and inexperienced to make other decisions about my life? Another note on the matter is that because of how the school system is structured, we expect 17 and 18 year olds to know what to do with their lives when they’re fresh out of being children. And yet, suddenly I was too young to be able to make a similarly life-altering decision.

Furthermore, I was looked down on even more for having met my husband online. Once again, I heard multitudes of criticism over it. Now, I recognize that finding a spouse online can be a risky endeavor. There are plenty of bad people on the internet and I 100% support being as careful as possible. However, I still encountered this criticism after having already met my then-boyfriend in person. I had already been speaking with him for months, had met up with him multiple times, but I was still receiving comments both degrading the way I’d found my husband and questioning my judgement.

Lastly, but certainly not least, the so-called “transition period” where you adjust to living with your future spouse, wasn’t nearly as hard as it was cracked up to be (at least for us). In fact, not only was it not hard, but it was easy and incredibly enjoyable learning to live with Max and share our home. This doesn’t mean it isn’t necessary to continually work together to keep the adjustment smooth. Communication really is the key, y’all, as cliché as that sounds.

I write all this to say …. All this criticism and the trials I had to go through for people to accept my method of finding a spouse were harder than the first six months of my marriage. The hard part wasn’t the marriage; it was dealing with naysayers and Debbie Downers, who told me everything was going to be horrible and difficult for the first year of my new life.

Here’s the thing about the first six months of our marriage. We’ve definitely had some hard times. BUT (and this is the important part) those hard times came from outside of our relationship and we learned how to face hardship together. I mean, let’s be real, is there much that’s more difficult for a young couple to deal with than loss of a child (by miscarriage in our case)? But we’ve weathered that storm and continued to do so as we’ve done every other: side by side, being each other’s greatest comfort and strength (outside of the Good Lord Himself).

Was it easy to learn how to take care of each other? Yes and no. The beginnings of it came naturally in many ways because of the love we had for each other, but there was a lot we had to learn about both ourselves and each other to do this most effectively. We had to learn to lean on each other, but also to lean on God as a couple (let me tell ya, it helps if you were doing it in your life before marriage to figure out this part after).

The moral of this story is you can’t let other people tell you what your marriage is going to be. What they say, they largely say out of love, even if their advice would be disastrous if applied to your relationship instead of theirs. This doesn’t mean you shouldn’t listen to any advice, simply be discerning as with everything else in life, and don’t despair that the first year of your marriage is going to make you hate your new spouse (it won’t).

These first six months of our marriage have been the best six months of my life so far. I can no longer even imagine my life without Max and I can hardly seem to remember what I was like before being married. It really has been six months of wedded bliss. It doesn’t mean there hasn’t been work to make it remain so. It doesn’t mean that we haven’t had hardship, though it has largely been thrown at us from the outside and if you don’t let it take over, you can stand together against anything with God’s help.

So for all of you, from those looking for a spouse, those waiting to be married to their soon-to-be-spouse, or anyone already married (newly or for any length of time), I hope this helps you. It’s never too late to mend your marriage if you’re having problems and if you’re not yet having problems, learn to understand both yourself and your spouse and COMMUNICATE in order to avoid them.

The first year of your marriage can be absolutely beautiful, especially if you work to make it so. You’re worth the work; your spouse is worth the work (that’s why you married them after all, because you love them enough to try).

One thought on “Life after 6 Months of Marriage”